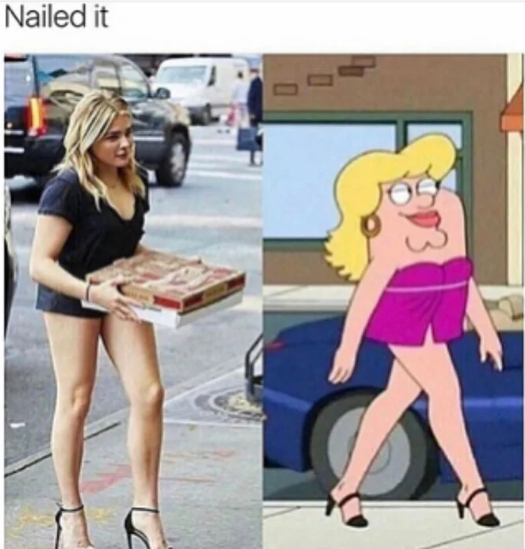 I actually had no idea that “Legs All The Way Up Griffin”, first introduced in the Family Guy episode “Amish Guy” (which first aired in 2011), was even a meme but here we are talking about it because actress Chloe Moretz feels some type a way about it after a random troll online connected the meme to a picture of her out in public. According to Moretz, because of these jokes, she became a recluse as a result of body dysmorphia issues stemming from the aforementioned meme.

For those that don’t know, “Amish Guy” follows the Griffins as their car breaks down in Amish country forcing the family to have to adapt to the ways in which the Amish live. Meg eventually falls for a local boy named Eli, but it doesn’t take long before the Griffins piss off the Amish and forces the locals to push the controversial family off of their land.

Chloe Moretz first gained fame from the film Kick-Ass which came out in 2010, in the role of “Hit-Girl”, a foul-mouthed pre-teen superhero that goes nuts after the passing of her father therefore causing her to go on a killing spree to both avenge her father and help Kick-Ass learn to be a hero himself.

The lesson to be learned here, if you are famous, shit like this is part of the job. Michael Jackson got fake nose jokes for the entirety of his life but still made a bunch of money and millions more loved him despite his legal troubles.

The other thing to know, other outlets are incorrectly attributing that “Legs All The Way Up Griffin”, was about Chloe Moretz, which isn’t true because the meme was created five years after the episode had already aired, so keep that in the back of the mind as you mine through the noise of this one.